As I play World of Warcraft, I find myself thinking how my characters might react to certain events and activities I’m playing through. Most recently, the War of Thorns and Siege of Lordaeron. And yes the following contains spoilers for the pre-patch quests.

However, my main is also a Shadow Priest, and I get the feeling she might have other things on her mind right now, namely: whatever the heck is going on with the Void. She spent an entire expansion with an evil, whispering dagger and now the war between the Horde and Alliance is starting up in a major way, and it all began with the burning of her home and the genocide of her people. 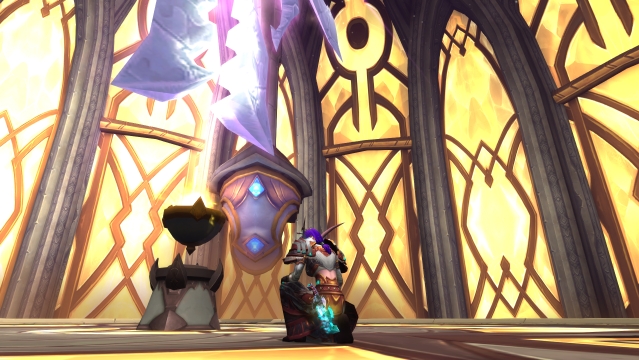 A lot had happened around her in her long life. She had used her Void magics to push the Burning Legion back, several times, she had aided the Alliance in retaking Orgrimmar for the Horde, and even Undercity back in the day, but this felt different somehow. Worse. Because despite everything they had fought, and won, against, no matter how slim the odds, the Horde had come back with this… and now she could never go back home.

Seithir struggled a lot with sleep at the best of times. One of the side effects of utilising the Void in the way that she did meant enduring the constant whispers. They had kept her awake a lot over the years, but they were oddly quiet now and this unnerved her, for it left room for her own thoughts to rise to the forefront.

“You deserved it. What have you done? The tree was rotted anyway. How could you? What did you expect? You’re no Priest. She must die. N O.”

The whispers she could block out with ease nowadays, but this was torment and now the Night Elf paced the cramped room in the Stormwind Inn she was staying in. Why had the whispers stopped? Was she losing her touch with the Void? Was something happening to it? If she could just quiet these damn thoughts, perhaps she could listen out for something. A sign that things were as they should be or worst case, a warning. But with everything happening over these past few weeks, she wasn’t sure she could do that right now.

The Horde had come for them. Not just the Alliance, but the Night Elves themselves. Hundreds had been wiped out and their home burned and for what? A tactical advantage? Revenge? No. What the Horde did that way was evil, plain and simple, and Seithir knew the difference after her long internal battle with the Void. It was possible to use something twisted and make something good from it, she was living proof, but genocide is never the answer. Those people who died that day died for no other reason than they had not the means to save themselves. They were innocents going about their day. And that’s not even to speak of their campaign to retake Lordaeron after these long, dark years of Horde occupation. So many more had died… the Banshee Queen using that disgusting Blight to strip Alliance and Horde alike down to bare bones and reanimate them. It made Seithir sick to think about that, and know that the Horde were just letting this happen? These were war crimes, plain and simple, and Sylvanas Windrunner must be brought to justice. But that wasn’t what kept her up most, these days. That was merely a distraction from the silence.

This site uses Akismet to reduce spam. Learn how your comment data is processed.

Welcome to Dragons and Whimsy

Hello! I am Hannah (or Jaedia), a British ace spoonie who loves a good story. Join me as I seek dragons and whimsy in fantasy worlds, science fiction adventures, and creepy horror tales in books, film, games and beyond!

Posts You May Enjoy

The Liar of Red Valley
by Walter Goodwater